In August, 2017, I took a trip to Glendo, Wyoming, with a Sky and Telescope tour, to see the August 21st total eclipse of the Sun, which was awesome.  The advice of the old hands was that, if this was the first total eclipse I was seeing, I shouldn’t waste precious seconds taking photographs.  I should just be looking.  But before totality was reached I took the opportunity to add to my collection of pinhole images and at the same time recognize that my  astronomy club, the West Jersey Astronomical Society, WAS, was celebrating its 50th year.  Here are 47 pinhole images of the partially eclipsed Sun! 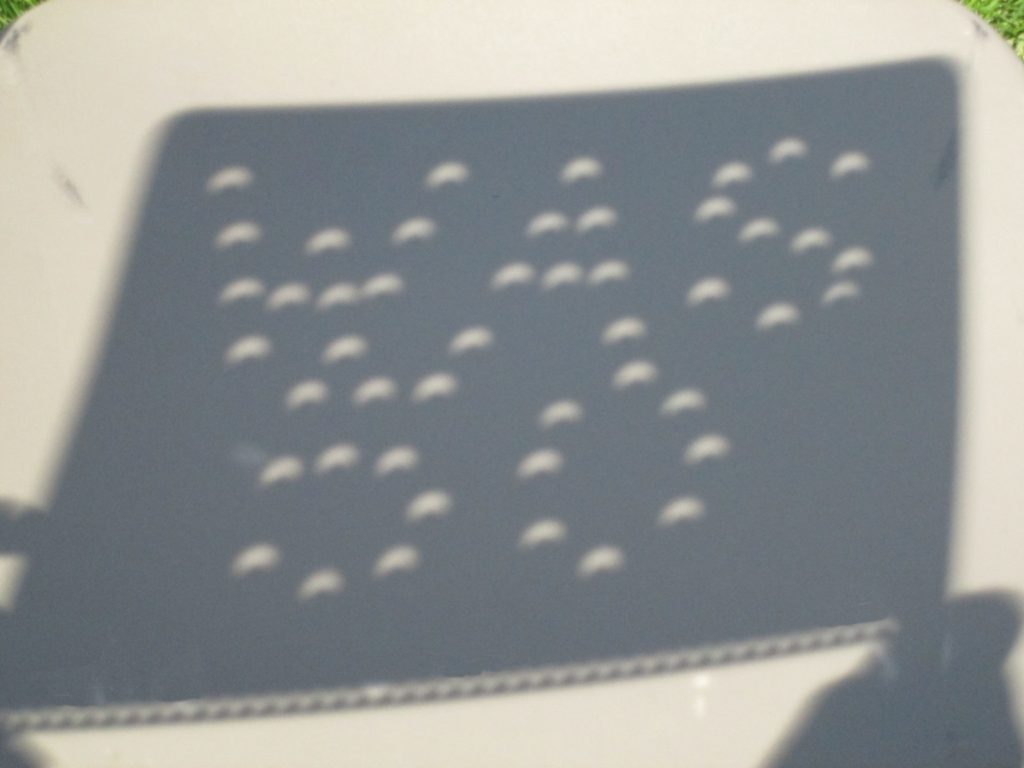 As I said on the home page, I have upgraded my sextant to a Davis Mark 25.  After some time to get used to the new sextant, I have had four successful runs using the false horizon method in my backyard.  With the higher magnification of the telescope in the Mark 25 sextant, my simple bowl-of-water false horizon was very sensitive to breezes and to passing traffic, but I persevered.  The average of the four runs is a latitude at my home of 39° 53′ 21″.  This is a good result, but based on the spread of the four runs I have to put the uncertainty at ±20″.

To complete an improved estimate of the diameter of the Earth, I now need a fine Fall day for me to drive down to Cape May and re-measure the latitude there.

An extra use for these new values is to try to refine my value for the length of the Tropical year.  I have been making sporadic observations of the Sun’s altitude since 1988, and the value quoted in my book, of 365.25 ± 0.01 days, was based on measurements made up to 2011.  The new values, for September 2017, don’t increase the base line very much, but I might as well try!  The most successful method of analysis I have found seems to be to plot all the measurements with the dates reduced to a single period using the modulo function in Excel, with an instruction “=MOD(Julian date, guessed year)”.  With the new data, I judge that a guess of 365.24 gives as good a fit as 365.25, and may even be a smidgen better.  I am putting my best value as half way between these, but keeping the uncertainty at 0.01.  So 365.245 ± 0.01 days is my current best estimate.