(This page was last modified on 6/1/2022.  In the header photograph Mars is moving between the Hyades and the Pleiades.) 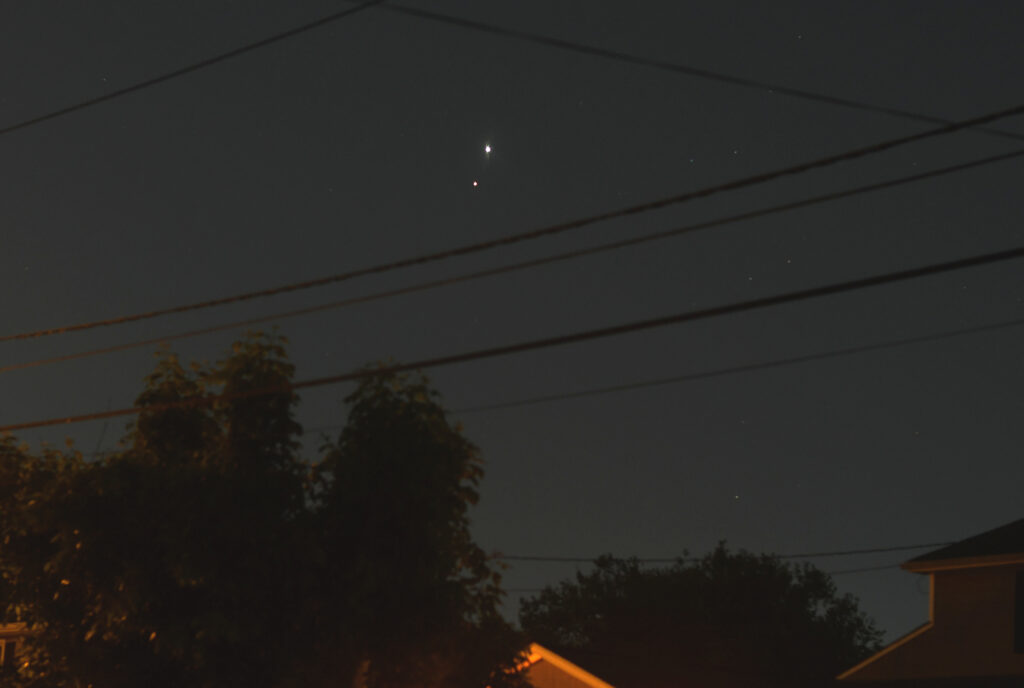 Astronomy textbooks say that Kepler discovered his three laws from an analysis of the  data of Tycho Brahe, and that he concentrated mainly on the results for Mars.  I begin to understand why!  Mars is the closest to us of the superior planets and it has the highest eccentricity.  In consequence its behavior seems to be the most difficult to describe by simple calculations.

I tracked the retrograde path of Mars very fully in 2016.  I  actually followed it from early in March until the beginning of October.  Based on the success I had analyzing the results for Jupiter in 2015, which I showed in my book, I was perhaps a little over-confident about Mars.  I put the results into the same fitting program that I had used for Jupiter, as well as for two earlier oppositions of Mars, and the results were AWFUL.  My first reaction was to abandon the fitting idea completely.  Using input data from the Observer’s Handbook, I wrote a program that used elliptical orbits for both Mars and the Earth, and the measured retrograde loop was very accurately reproduced.  That at least showed that my measurements were OK, but it went against my general philosophy to use the handbook values.  My whole objective is to pull out values of my own.

At this point I recognized that the time interval I was trying to fit was almost a third of a Martian sidereal year, so that it was optimistic to approximate that part of Mars’s orbit by an arc of a circle, which is what my fitting program did.  I also looked back at the fits to the two earlier oppositions of Mars.  The quality of the fits was not quite as high as the fits for Jupiter, although I had been prepared to accept them at the time.  I also realized that, by chance, at both the earlier oppositions Mars had been quite close to aphelion, when its angular velocity and distance from the Sun would have been changing relatively slowly, whereas, at the 2016 opposition, Mars was just about half way between aphelion and perihelion, so that its angular velocity and distance from the Sun would have been changing at their greatest rates.  All of this indicated that I needed to modify the fitting program to let these changes happen.  But I did want to keep the changes as simple as possible.

I added one new parameter, which measured the rate of change of the angular velocity, or its angular acceleration.  If you took an introductory physics course, you probably met up with the set of equations describing a point object moving with constant acceleration.  I used the same equations applied to the angular acceleration.  As for the distance from the Sun, Kepler’s second law relates  that to the angular velocity for an elliptical orbit, so I could use that relationship without adding another parameter.  The resulting program gave good fits to the new results, and I also went back and reanalyzed the results from the two earlier oppositions with better agreement than the earlier fits.  Here is the fitted curve for 2016. 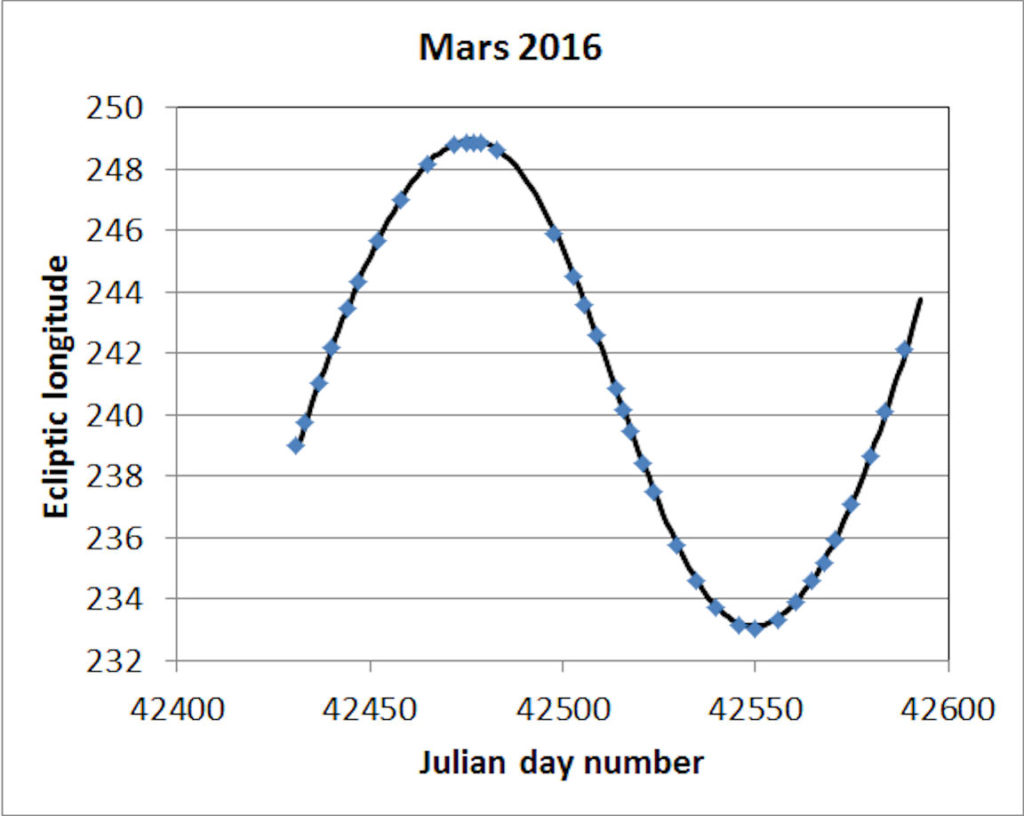 While I really should wait until I have more data, it is tempting to try to extract a value for the eccentricity of Mars’ orbit, using a refinement of the method I applied to Saturn and Uranus on their page.  The fit to the new data gives values for the instantaneous distance, d, and period, T, of the orbit, and I can calculate the ratio d²/T as 1.2297.  Apart from some extra factors, this is a measure of the angular momentum of the orbit and it can be calculated from the semi-major axis, a, the period, P, and the eccentricity, e, as a²√(1 – e²)/P, or, if I combine this with Kepler’s third law, P²=a³, I can write that as √(a(1 – e²)), and this has to have the value 1.2297.  In the case of Mars, I have a pretty good value of a based on the sidereal period, and given in chapter 16 of my book as 1.525.  Putting these two numbers together I calculate a value for e of 0.0918.  This is a really good value. The uncertainties in d²/T and the semi-major axis combine to give an uncertainty in the eccentricity of 0.0094.  So I can write

Just as I feel I am getting on top of Mars I get another setback.  I followed Mars in 2018 from the very beginning of the year until the middle of October, although the retrograde motion occupied only the last part of this.  The catch is that Mars went through perihelion about eight weeks after opposition but still during the period I try to analyze.  So it was speeding up for the first part of the period but slowing down for the last part.  Neither my original program, which treats the speed as constant, nor the improved version, which treats the angular acceleration as constant, did a good job on the data.

I did run the data through the program that I first used for the 2016 data, that uses elliptical orbits for both Mars and the Earth.  It gave terrific agreement with my measurements, not only for the retrograde motion part but for the whole ten and a half months worth of data.  I could write a least-squares routine to fit the orbital parameters of Mars rather than taking them from the handbook but there seems little point to it for now.