I have grouped Saturn, Uranus and Neptune together because, from my viewpoint, they present a similar problem.  Their sidereal periods are longer than the time interval that I have been making measurements for, so that the methods that I used to find the periods of the other planets don’t work so well.  For Uranus and Neptune especially I am extrapolating its behavior over quite a short fraction of an orbit.

I tracked Neptune through its opposition in September 2021 and continued until it got very low in the twilight in February.  Here is the measured loop: 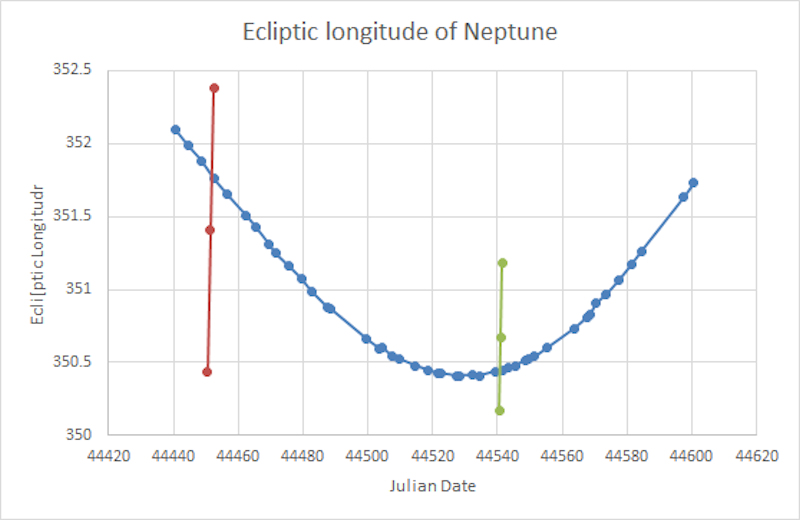 My fitting program gives values for the average distance, R, of Neptune from the Sun during the loop and the time T it would take it to complete a revolution if it kept moving at its present speed.  The values I get are R = 30.1 ± 0.2 a.u. and T = 163 ± 3 years.   These are both a bit smaller than the semimajor axis of 30.23 a.u. and the sidereal period of 164.79 years, but I expected that because Neptune is moving (very slowly) towards perihelion.

For Saturn and Uranus, I did pull out from my old notebooks a more-or-less casual observation from several years earlier, which I finished up making a lot of use of, but the values I calculate come out rather higher than the handbook values. It is just my bad luck that both planets have been moving through aphelion.  I have made some new observations beyond the results in my book, but the gain in precision is very slow.

Here is a summary of my measurements of the oppositions of Saturn and Uranus:

The first result is a bit less accurate than the others.

The first observation is very approximate.  The date is uncertain by ±30 days and the longitude by ±7.5°

One way to use these numbers, very similar to what I did in several places in my book, is to plot graphs in Excel and ask for linear trendlines.  For example, I can plot the longitude at opposition versus the Julian day, and from the slope I can calculate the sidereal year.  The values that come out from the slopes of the lines are not significantly different from the values that I calculated by hand, given in chapters 5 and 7 of the book.

More or less as an experiment, I tried another approach.  It has the advantage that it actually needs only the measurements taken during one retrograde passage.  For each passage, my least-squares fitting program gives values of the distance of the planet from the Sun at opposition, and a number that I called the instantaneous period. This is actually just a way of parameterizing the angular velocity.  For uniform circular  motion, the angular velocity is related to the period by ω = 2π/T and it was easier for me to continue using T as the fitting parameter than to bring in ω as a new parameter.  Kepler’s second law is that the planet sweeps out equal areas in equal times and that is equivalent to saying that d²ω or d²/T is constant.  d is the distance of the planet from the Sun at opposition.  The fitting program also prints out a value of d²/T.  Here are the results for the two planets.

As I pointed out in my book, the values of d²/T for each planet are equal within the uncertainties, and this does verify Kepler’s second law.  They should be approximately equal to a²/P, where a is the semi-major axis and P is the sidereal period.  There is also a factor of  √(1 – e²).  I could assume this is close enough to 1 compared with the precision of my values, but I shall take it into account at the end of my analysis of the results, and also for Mars on its page.  The new step I am taking now is to apply Kepler’s third law.  If a is measured in astronomical units and P is measured in Earth years, which are the units used in the tables here, Kepler’s third law is that P² = a³.  Then the ratio a²/P is just equal to the square root of a or the cube root of P.  That is

The catch with this approach is that it does rely completely on the exactness of Kepler’s laws, which we know is not quite valid, but I am assuming that the departures from the laws are smaller than my uncertainties.  The advantage, as I said, is that all this method of analysis needs is data from one retrograde passage so you could get these numbers in just a few months observations.

The results for Saturn are fairly complete so I can try a rather elaborate analysis.  Rather than simply using the most precise of the values, I can take a weighted average of all of them to find a best value of d²/T of 3.0905 ± 0.0073.  I could again ignore the factor of √(1 – e²) and square this value to get an estimate of the semi-major axis, a.  But if I assume that the largest value I have measured for d, 10.063 au,  is close to the aphelion distance I can find an estimate of the eccentricity e and hence apply the correction factor.  Of course, this changes the answer I get for a, so I have to repeat the calculation, and keep repeating it until the answer stops changing.  I did this iteration in a TrueBasic program, but in fact three or four iterations are enough.  The final values I get are

Taking the 2018 distance to be close to aphelion implies that the aphelion longitude is close to 276° so that the perihelion angle is about 96°.

This gives me a complete set of orbital parameters for Saturn.  As I have written for Mercury and Venus, the only number I am missing is the mass.  But, of course, I should be able to measure the mass of Saturn by tracking the orbits of one or more of its moons.  Is this a future project?  Keep an eye on this space.

Now to do the analysis for Uranus.  The best estimate of d²/T is 4.349±0.019.  This used directly would give values for a and P of 18.91 and 82.28.  If I make an iterated correction to this assuming that my largest value of the distance is close to the aphelion distance I get my best values

The value for the eccentricity is rather higher than the handbook value but within my uncertainty.  The value of 358.6° for the longitude at opposition that I measured in 2010 would correspond to a longitude of perihelion of 178.6°.  With my present equipment I have no chance of observing any moons of Uranus in order to find its mass.