The Moon is always full of surprises!  I have been making simple observations of it for over thirty years, and they have allowed me to get pretty accurate values of the synodic and sidereal months.  These involved just naked-eye observations.  More recently I have been using  photographic methods, first to measure how the angular size of the moon varied and, since 2014, how its angular distance above or below the ecliptic changed.  From the first set of measurements I can find a value for the anomalistic month, and from the second I can find the draconic month.  But these are works in progress.  There are many small contributions to the Moon’s orbital motion that cause small variations in all of these periods, and the only way I have of sorting them out is to extend my measurements over as long a time as possible.  Have patience!

The photographs below show two stages during the almost total lunar eclipse of November 17, 2021.

Here is another new result.  I mentioned at the end of chapter 15 of my book that I could extract the longitude of the ascending node of each of the planets and the Moon from my measurements of the tilt of their orbits.  For the Moon in particular, the ascending node is rotating in a negative sense compared with most of the changes in its orbit.  I have added three new points to that set of measurements and they pin down the slope of the line much more precisely. 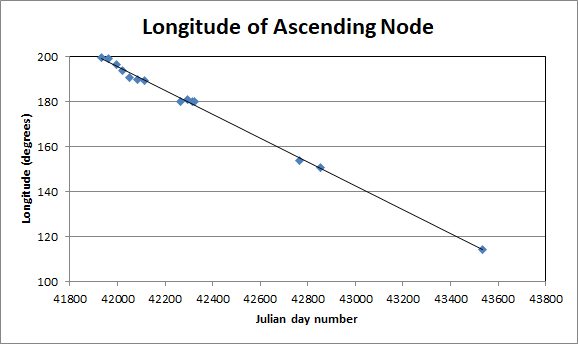 The slope now corresponds to a complete rotation of the line  of nodes in 6798.5 days, or 18.61 years, with an uncertainty of ± 0.05 years.  If I combine this with my sidereal year measurement, I get a “back-door” value for the draconic month of 27.212 ± 0.003 days.  This is an uncertainty of about 4 minutes.  Jean Meeus shows a calculation of the sloping line as Figure 1.c in his book “Mathematical Astronomical Morsels”.  My results show small oscillations that are quite similar to the ones in Meeus’s curve, but I am not sure if mine are significant, given the crudeness of the measurements.

I continue the measurements of the angular size of the full moon, which I use to calculate the anomalistic month.  The current best fit of a sine curve to the results gives a value for the month of 27.557 days while the “backdoor” route of combining the super-moon period with the synodic month gives 27.554 days.  The only numerical error in my book that I have found is that I mistyped the handbook value for this month.  It should be 27.5546 days, so my values are closer than I had thought.

My values for the synodic, sidereal, anomalistic and draconic months are all good to at least three decimal places.  The Observer’s Handbook lists a value for a fifth month – the Tropical month.  It is almost identical with the sidereal month but measures the month relative to the ecliptic coordinate system instead of directly from the fixed stars.  When I started my measurements of the angle of the Moon above the ecliptic I realized that I got without any extra effort the values of the ecliptic longitude.  I can make a plot qualitatively like the plots for the synodic and sidereal years in my book, and extract a value for the tropical month.  The are two catches.  The big one is that my data cover only five years whereas the other plots cover thirty years.  The best value I can get at the moment is 27.32 ± 0.01 days.  The second catch is that I use several programs to process the results and I am not sure if a part of my answer is built into them.